Fatal Wounds: Chomsky and Hitchens on Bosnia and Iraq.

I recently had the pleasure, during one of my many late-night YouTube binges, of stumbling upon a 1995 video of two of America’s most lucid, compelling, and influential public intellectuals. At an open lecture hosted by the now-defunct CovertAction Quarterly publication at the University of the District of Columbia, the late Christopher Hitchens spoke with his trademarked eloquence during an interlude in Noam Chomsky’s address. Pairing élan with wit in classic Hitchens style, he besought the audience to donate generously to the magazine so that it could maintain its investigations into the depravities of the CIA, investigations that had motivated Chomsky to come discuss and praise. Hitchens, too, was full of praise but more for Chomsky than the magazine’s activities. His financial appeal was augmented by a borderline fawning account of Chomsky and his role as a truth-seeker, humanitarian, and America’s most famous dissident. Most viewers would agree that Chomsky, at least for a brief moment, had both a staunch admirer and an exceptional potential successor.

When we fast-forward only six years, however, the relationship has completely fractured. What began as an unexpected ideological fissure over America’s intervention in the Balkans, shortly before this video, had widened beyond repair following 9/11 and the Iraq invasion. Chomsky maintained that US intervention in Bosnia, indistinguishable from so many previous cases, was a crime of state violence engineered to achieve imperialist, and thus nefarious, aims. Hitchens resisted the conflation of US forays in countries from Nicaragua to Iran (which he also decried) with what was essentially a humanitarian intervention in Bosnia – the absence of which was to almost guarantee the ethnic cleansing and annexation of one of Europe’s oldest Muslim societies.

Simply scrutinising the evidence vindicates Hitchens on Bosnia for he had only to cite the ongoing Bosnian-Serb-led or inspired ‘cleansings’ of Muslim Bosniaks to endorse the resolutions of the London Conference of July 1995. The clear evidence of an aggressive, Serbian-nationalist expansion project together with the full consensus of and military sanction from the UN, NATO, and the sixteen nations at the conference meant that US involvement in this war was part of a genuine, humanitarian campaign and managed to achieve what was neglected later in Darfur, namely, the prevention of ethnic cleansing and genocide.

It is an ineluctable fact that Chomsky chose to indulge in conspiracy when all the evidence pointed the opposite way. Milosevic was indeed a socialist but he was also indicted by the International Court of Justice for war crimes in failing to both prevent mass murder and punish the perpetrators. Using Occam’s razor, the imperative of ending the siege and round-the-clock shelling of Sarajevo by Bosnian-Serb militias and preventing another massacre like Srebrenica were far more plausible than Chomsky’s misgivings about the tentacles of US imperialism attempting to strangle a defiant Serbian socialism. Chomsky’s refusal to side with his most-detested bête noire led to a series of contrived misinterpretations and a failure to take a humanitarian stance 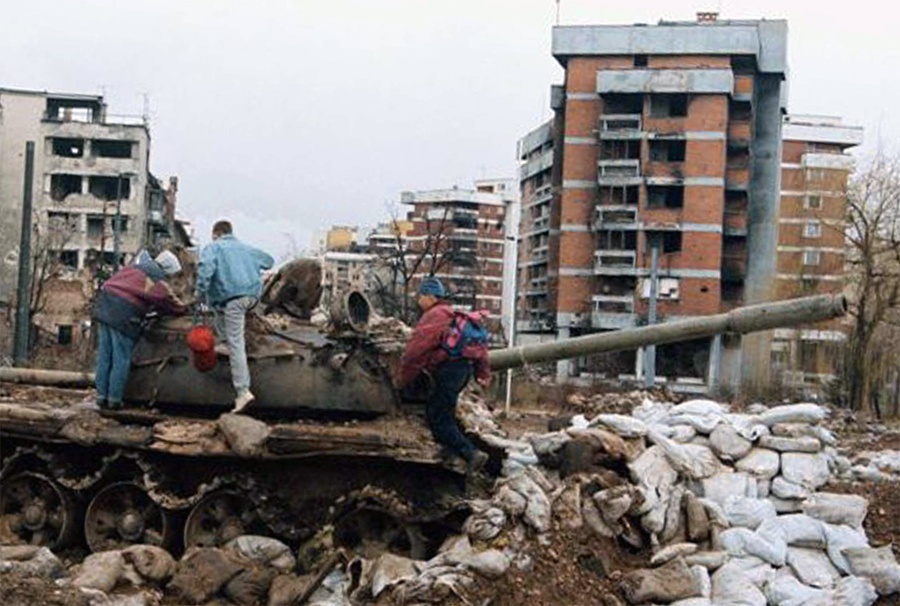 As Hitchens accurately pointed out in his 2010 memoir Hitch-22, we witnessed an ironic declension on the part of principled intellectuals such as Chomsky and Said over Bosnia whereby “in the final instance they believed that if the United States was doing something, then that thing could not by definition be a moral or ethical decision.” Surely, however, the litany of past US crimes on foreign soil meant that this position wasn’t entirely irrational.

Commenting on the later unsanctioned NATO air strikes on Belgrade during the 1999 Kosovo war, Chomsky’s comments during a 2006 interview with Serbia’s RTS network were certainly credible in this context and a telling insight into his thought processes during the previous Bosnian war, in which similar claims could not be substantiated. He similarly argued that the so-called humanitarian intervention in the Kosovo war was a poorly disguised attempt to eliminate the last successful and noncompliant bastion of socialism in the region. Citing a published account from the former Clinton official John Norris, he maintained that socialist resistance to US-run neoliberal programs was what really triggered the invasion and that dismantling Milosevic’s regime and the ‘Greater Serbia’ project was therefore the true aim. The air strikes on a densely populated city, despite no evidence of direct military involvement in the insurrectionist enclave, seems testament to this. While it can be argued that Chomsky suffered a lapse of his normally-laudable critical thinking on Bosnia, his reluctance to abandon his mistrust of US motives is somewhat pardoned by the messy and evidently non-humanitarian actions in Belgrade just four years later.

When it came to Iraq, however, the legitimacy of Chomsky’s criticism of US interventionism was firmly restored to its mantelpiece and it was Hitchens’ turn to earn a reputational smear, and arguably a much larger one at that. That’s not to say that having an opinion warrants contempt, but subscribing to and promulgating baseless claims certainly does and Hitchens was as guilty of this on Iraq as Chomsky was on Bosnia. He parted with the clear and evidence-based thinking that had previously served him well and his unapologetic support for the 2003 invasion was the death knell for his relationship with and support from the American left.

In the case for hidden agendas and shameless imperialism, Iraq was the textbook example and so to assent to the pretexts of WMDs or a Saddam-Al-Qaeda alliance was to abandon a truly intellectual and moral analysis of Bush’s raison d’état and join the swarm of neoconservatives including Rumsfeld, Cheney, Wolfowitz, and, whom Chomsky has described as “merely a vulgar propagandist,” Bernard Lewis.

However, the point needs to be made, although not unapologetically, that Hitchens had his own reasons for supporting the war that didn’t neatly align with the pretexts of the aforementioned cretins in that his own were long-standing and far more noble. As a life-long advocate of Kurdish self-determination and after later witnessing the exhumation of an archipelago of mass graves holding the remains, among others, of Kurdish and Shia children shortly after the invasion, Hitchens felt vindicated by Saddam’s removal even if this had meant taking the side of mercenary gremlins. Chomsky has pointed out, however, that if the US was really concerned about Kurdish (or Shia) liberation or Saddam’s chemical arsenal, there was many an opportunity to act earlier and in the case of the former, during the ruthless Anfal genocide (the exceptional obscenity that was the Halabja chemical attack of 1988 should have been the final straw for a humanitarian intervention).

As Chomsky has reiterated ad infinitum, it is only after Saddam became noncompliant with and a direct threat to US strategic interests that action was finally taken, and so that any collateral good that came from the invasion (Kurdish autonomy, Shia emancipation, restoration of the southern marsh ecology, etc.) was merely collateral – positive contingencies that came at the cost of an illegal, imperialist war predicated on lies.

In his 2003 book Hegemony or Survival, Chomsky explains the Bush administration’s need to find a pretext that would both “legitimise” the war and cloud its true intentions. He cites the recrudescence of propaganda to fulfill this need, identifying the campaign to “depict Saddam as an imminent threat to the United States and to insinuate that he was responsible for the 9/11 atrocities and was planning others.” Appearing to ignore this obvious ploy, Hitchens’ incessant focus on the above imperatives (albeit all undeniably legitimate) has to be ultimately weighed against the foretold conflagration of insurgency and sectarian violence that has torn the country apart and left over half a million Iraqis dead to date.

From just these two wars alone, which have divided public opinion so heatedly and sullied many a reputation, we are given fascinating case studies for not only the incoherence of US foreign policy (as if we needed reminding of that), but also the disintegration of personal friendships and once-formidable alliances. If there were lessons here, they would surely come as an injunction to value critical and evidence-based thinking over ideology and personal agendas, resist the engine of state-monopoly capitalism and imperialism that is the war economy when and where it rears its ugly head, and a not-so-subtle reminder that taking the side of the victim is what really matters.