Helmed by progressive Melbourne bars Section 8 and Ferdyduke, ZOO Laneway Party will return this year at the end of Melbourne Music Week on the 25th November. The boutique festival has hosted more than seventy local and international creatives throughout its five year run. Taking place across Tattersalls Lane and the bars themselves, the recently announced lineup exhibits a diverse and up and coming array of artists that many festivals should take note of. Accordingly, here are three artists you can’t miss.

Establishing himself as one of Australia’s leading voices for indigenous citizens, Adam Briggs’ potently in touch societal dialogue is expressed in no stronger form than his heavy-hitting hip-hop. His latest record, “SHEPLIFE”, is fuelled by rapid-fire rhymes that dynamically shift between the aggressive and meditative. Do yourself a favour and catch one of Australia’s most thrilling contemporary artists.

With his slick, hip-hop infused electronica Afta-1 has produced an immensely brilliant discography over the past decade. The Southern Californian will visit Australia for the first time for “ZOO Laneway Party” and will undoubtedly provide a sublime groove of a set come November.

Modern soul rarely sounds as grandiose as Fatima, the Stockholm born East Londoner who wraps her gorgeous vocals around pulsating melodies and downright funky beats. Paired with DJ Alexander Nut, the pair are set to get your hips moving and head nodding through the night.

The “ZOO Laneway Party” kicks off at 2pm on Saturday 25th November. Further details regarding the event can be found here 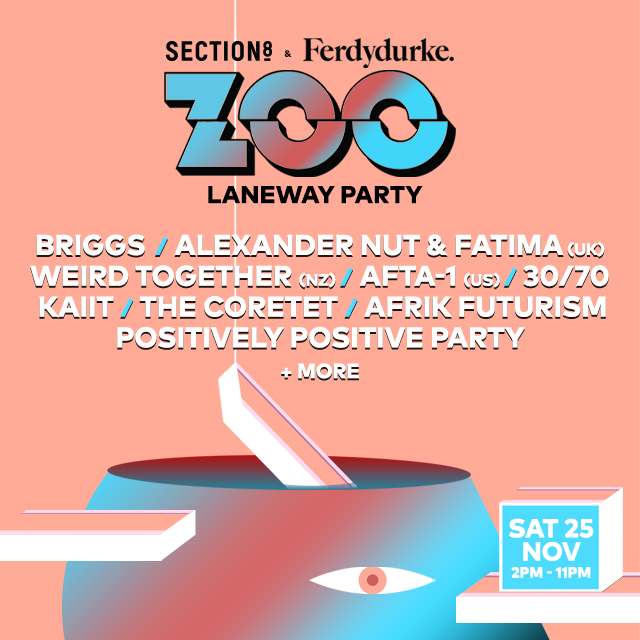